During the past two years, the popular “Girls with Guitars Tour” put a thoroughly feminine stamp on the Blues Caravan. But it’s time to reshuffle the cards…
On the latest edition of the annual tour presented by Ruf Records, a couple of rough-and-tumble guitarists from North America will go head-to-head with a dynamic British female singer and guitar player whose every show is a display of raw and emotional power. Rest assured: When this trio of hard-nosed pros step into the ring, they won’t be pulling any punches. 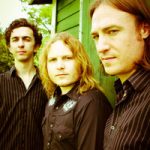 Jimmy Bowskill was discovered by renowned bluesman Jeff Healey at the tender age of eleven. The native of Canada has toured Europe several times and delivered a strong debut for Ruf Records with his 2012 release Back Number. While he started out as a fairly traditional blues stylist, he has since moved progressively toward classic rock. His trio has supported acts like Jeff Beck, Joe Bonamassa and Wishbone Ash to great accolades, but he no longer needs to ride on anyone’s coattails. “The music I make now has a more rocking sound than the more traditional stuff. But to me it’s just my take on the blues,” explains Bowskill. “I’m in my early 20s and full of energy, so of course my music will have a different edge to it.” 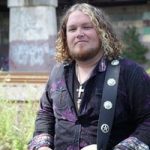 Bart Walker, whose 2012 debut album Who I Am has been well-received by critics, adds a down-home, earthy touch to the Caravan lineup. At the 2012 International Blues Challenge, this Nashville-based guitar standout took home the coveted Best Guitarist honors. In recent years, he’s provided brilliant support to country-rocker Bo Bice while honing his skills as a writer of powerful songs full of southern flair. Former Stevie Ray Vaughan band member Reese Wynans was so impressed with Walker’s talents as a singer, songwriter and guitarist that he promptly decided to join his band. “When I saw Bart Walker, I saw something special, so I jumped at the chance,” says the legendary Double Trouble keyboardist. 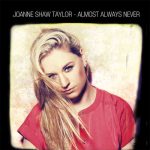 Joanne Shaw Taylor, the only girl with a guitar on this year’s tour, is no stranger to the Blues Caravan: The 2009 tour was an important step in her budding career. Hailing from England, Taylor now resides in Texas and it was there that she perfected her brand of spirited, hard rocking blues on the recently released Almost Always Never. “I started playing little clubs in the UK when I was 14 or 15. But the sound of this album is a better representation of what I always wanted to be as an artist,” says Taylor, who recently played lead guitar for Annie Lennox at the Diamond Jubilee Concert for Queen Elizabeth II. The album, her third for Ruf, has solidified her standing as the shooting star of modern blues. But no band is complete without a kick-ass rhythm section. Drummer Denis Palatin has been driving the Caravan for years and will be joined in the engine room by bassist Ian McKeown from the Jimmy Bowskill Band. The musicians on the 9th Annual Blues Caravan take to the road in January 2013 and will be bringing it to clubs and at festivals throughout the year. 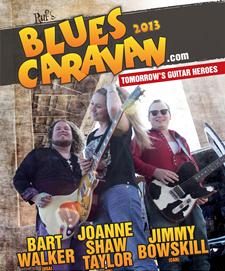